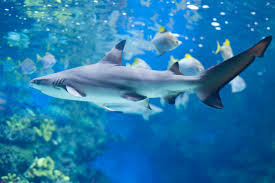 Government researchers in Australia have tagged more than 320 sharks with small GPS devices in hopes of improving the safety of beachgoers in the region.

When a tagged shark is within about a half mile of the beach, the GPS devices send an alert and a tweet is generated by Surf Life Saving Western Australia. The tweet includes the type of shark and approximate location. Even though Australia is home to about 160 species of shark, only three are considered dangerous to humans: the bull shark, tiger shark, and the great white.

Western Australia is home to more deadly shark attacks than any other location in the world. The partnership between the government and Surf Life Saving Western Australia was created to “develop new strategies for beach goes and users of the aquatic environment on the risks associated with sharks,” according to the Department of Fisheries Western Australia website.

The battery life of the GPS devices is about 10 years and in addition to warning beachgoers of potential dangers, scientists will have access to an unprecedented amount of data on sharks’ habits.