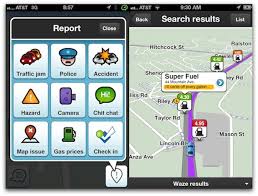 While most everyone was watching the World Cup final, a handful of people in Rio de Janeiro’s department of transportation were watching something else all together–aggregated data feeds provided by Waze and Moovit from smartphones moving all around the city.

Rio is using the information gathered for traffic management and is the first city in the world collecting real-time data from users of both apps. As for now, all the data shared is anonymous, but that could change if people are willing to be monitored in exchange for incentives. The city is also in talks with Strava, a popular cycling app, and hopes to monitor cyclists movements around the city in the near future.

Rio’s planners could access aggregated information from as many as 110,00 drivers and see 60,000 incidents reported on an average day in June, according to Waze. Waze and Rio have been working together since summer 2013 and Florida just signed on as well with other cities and states in the pipeline. In return for sharing user data, Waze will get real-time information from road sensors, construction projects, cameras, or city events.

“What we realized as we’ve gotten older is we actually have a greater mission to help cities operate more efficiently,” says Waze spokesperson Julie Mossler, “It’s this higher calling. We feel like we’re helping.”