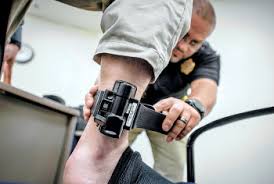 The Department of Homeland Security is using GPS-enabled ankle bracelets to track families caught crossing into the country illegally and released into the U.S.

Earlier this month Immigration and Customs Enforcement announced a program that provides some parents with GPS devices. Adults caught crossing illegally in Texas’ Rio Grande Valley were given the GPS-tracking devices and notices to report back before being released. About 70 percent of immigrant families here illegally fail to report back after being released.

The new ICE program is designed to cut the no-show rate and prevent jail time. If they report as required, the tracking device may be removed. The tracking devices will be used to monitor the percentage of immigrants reporting back as required, as well as how long it takes for them to report.

GPS-tracking is more cost efficient than other programs and much less expensive compared to jail. After an initial enrollment fee of $19.50, it will cost $3.50 daily per immigrant compared to $119 daily for jail. If the program is successful, it could be expanded. ICE has the capability to monitor 29,000 immigrants in 2015.