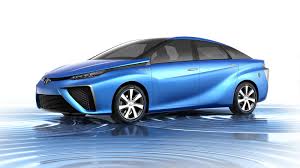 Toyota’s hydrogen fuel cell car, Mirai, which means future in Japanese, will launch in the UK next autumn and Japan next month.

It promises 300 miles on just one tank of hydrogen and can be refueled in a quick five minutes. President and CEO of Toyota, Akio Toyoda said, “Our fuel cell vehicle runs on hydrogen that can be made from virtually anything, even garbage! It has a fuel cell that creates enough electricity to power a house for about a week.”

Aside from being environmentally friendly, the vehicle also has a low center of gravity and dynamic handling, making it fun to drive, according to Toyoda. The company projects to sell between 50 and 100 Mirai’s in Europe in 2015 and 2016.