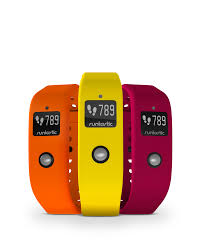 The Austrian company, known for its fitness apps, is launching a 24-hour fitness tracker that monitors activity as well as sleep quality. Orbit consists of a silicone band with a detachable module, is waterproof up to 300 feet, vibrates when a user has been sedentary for too long or reaches a fitness goal, and syncs via Bluetooth with the corresponding app.

To stand apart from all the other fitness trackers on the market, Orbit also includes a happiness tracker as well as an ambient light sensor and collects data on when people indicate they’re happy. Initially, users won’t benefit from this feature. But, Runtastic CEO, Florian Gschwandtnew, ensures the data team will analyze information to find relevant correlations like whether more sleep leads to a better running pace or if people are happier when their day is spent in a bright environment which users will eventually find useful.

Currently, the tracker’s screen displays activity length, time, steps, and calories burned but users can see distance, pace, and speed when using the app. Eventually, other Runtastic apps will be compatible with Orbit. The device retails for $120.