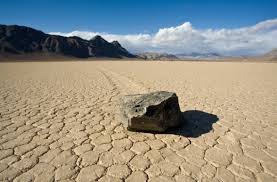 Hundreds of rocks in Death Valley, California have seemingly be moving all on their own–sometimes hundreds of meters at a time. Some of the theories attempting to explain how rocks, sometimes weighing  as much as 700lbs, moved across the dessert included dust devils, algal films, and hurricane-force winds. However, thanks to GPS tracking, scientists uncovered the real cause.

In 2011, paleobiologist Richard Norris from Scripps Institution of Oceanography at UC San Diego and his team of researchers attached motion-activated GPS devices to 15 rocks and placed a high-resolution weather station to measure wind gusts.  In December 2013, Norris discovered the area where the rocks are located is covered with a shallow pond of water and were able to sequence the movement of the rocks. When the thin sheets of ice created in freezing nighttime temperatures thaws combines with light winds, the rocks move–sometimes for as long as 16 minutes.

Some rocks moved over 200 feet and most moved several times before finally settling in one place.