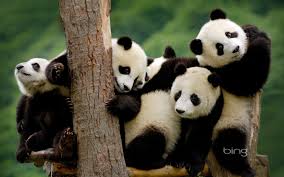 Giant pandas are notoriously elusive, shying away at the slightest notice of humans. So, researchers from Michigan State University decided to attach GPS tracking collars to five giant pandas in hopes it would reveal more about the bears’ habits in the wild.

One co-author of the paper suggested previous data on pandas is really incorrect because the pandas would typically become reclusive when being observed. “Pandas are such an elusive species and it’s very hard to observe them in wild, so we haven’t had a good picture of where they are from one day to the next,” Vanessa Hull explained.

The study followed four female pandas and one male panda all belonging to the Wolong Nature Reserve in China. Once the GPS tracking devices were secured around the pandas’ necks they were released back into the wild. As it turns out, pandas are far more social than previously suspected. Three of the female pandas traveled frequently together, and although the male traveled significantly less, he still regularly visited the other females–a finding that also suggests males keep multiple sexual partners at any given time.

Pandas also travel more for food and essentially eat their way out of one spot and move onto the next. Although the giant pandas are still an endangered species, there has been a 17 percent increase in the number of pandas in recent years.