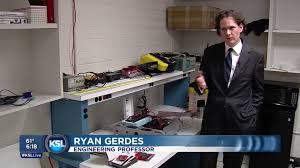 Students at the Utah State University are hacking self-driving cars in order to improve security. Associate professor Ryan Gerdes is heading the project.

“Right now in America, we lose about a trillion dollars every year to congestion in our roadways,” he said. “We also have about 40,000 deaths annually.” He’s hopeful the research he and his team of student is doing will better security in the vehicles before they ever hit the public road.

Although they could never create an entirely hack-proof security system, the team wants to ensure autonomous vehicles can maneuver safely around a dangerous vehicle or if the information the car is receiving is being manipulated.  Gerdes’ project is funded by $1.2 million grant from the National Science Foundation and he hopes to begin testing in just a few months.