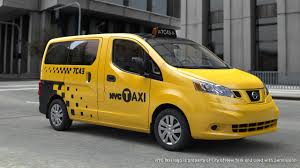 Taxi fleet owners in New York now have the right to appeal “Taxi of Tomorrow,” a $1 billion dollar plan to introduce a new fleet of Nissan taxis.
A Manhattan appellate court ruled fleet operators have the right to appeal the ruling which would require medallion owners, who operate yellow cabs in New York, to purchase the new Nissan vehicles valued at just over $29,000 a piece.  The Greater New York Taxi Association has called the program “flawed from the beginning,” and stated, “The Taxi of Tomorrow as planned forces owners to purchase a single foreign-made vehicle, which is neither fuel-efficient nor wheelchair accessible.”
Nissan originally won the contract in 2011, which would supply in excess of 15,000 minivans with back airbags, more luggage space, and sliding doors to the city’s taxi fleet over a 10 year period. In December 2012, fleet owners sued New York city leading to a revision of the rules. The new rules set forward allows medallion owners to buy hybrid vehicles until a hybrid version of Nissan’s NV200 is available.
FieldLogix
We use cookies to ensure that we give you the best experience on our website. If you continue to use this site we will assume that you are happy with it.OkPrivacy policy