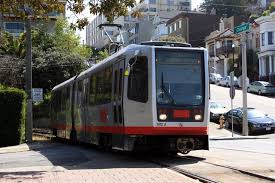 The 40 light-rail vehicles will cost the city around $210 million and the 175 light-rail vehicles already approved have been purchased from Siemens for roughly $648 million. Money for the new light-rails is expecting to come from the SFMTA board of directors as well as California cap-and-trade funds.

Riders were asked what they would like in new light-rail fleet vehicles and a primary request was permission to bring bicycles aboard. The new trains were designed to accommodate that request. The new vehicles will also last longer and require less maintainance.