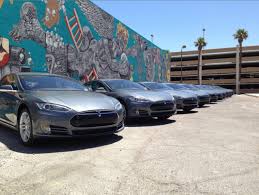 Shift, a new Las Vegas-based transportation start-up, is ready to put its 100-strong Tesla fleet to work. The company has secured $13 million in funding, including $10 million from Zappos CEO Tony Hsieh, to implement its own intelligent transit system.

The all-electric fleet of vehicles, including Teslas, smart cars, shuttles, bikes, and on-call valets will be available to people in downtown Las Vegas and the surrounding urban areas. Better yet, Shift guarantees users will be on their way within 5 minutes of using the app. When a user wants to get from point A to point B, the app runs an algorithm that’s “basically a math calculation. Where you are + where you want to go + how you want to go (drive/ride/bike) = the mode we match you to,” says Shift CEO Zach Ware.

Rather than trying to tackle Uber, Shift aims to eliminate the need for car ownership, and make it easier for commuters who live outside the downtown area. And, unlike Uber and Lyft, Shift is a membership company. Prices aren’t public, but according to Ware bike-only access is around $25, while 20-30 trips will cost upward of $250 and frequent travelers will spend about $500.